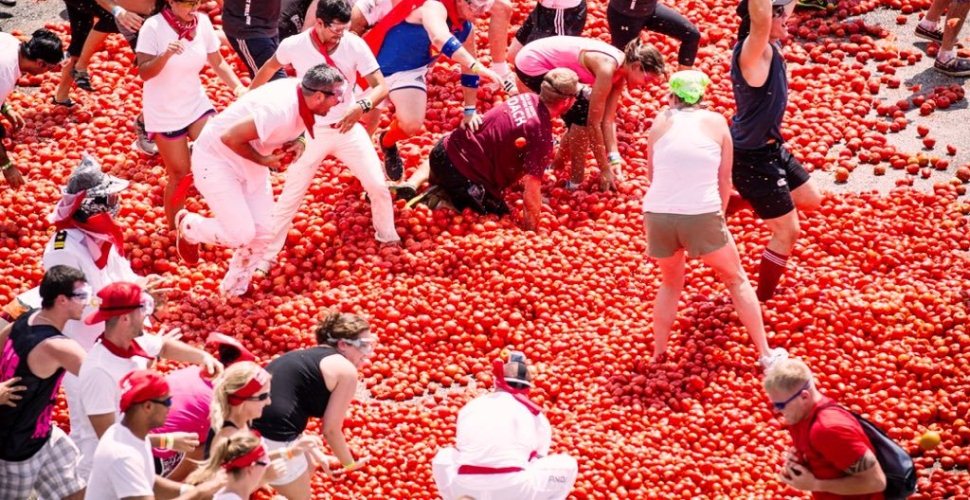 Well known festival in Spain which is organized in Valencian town with the activity of throwing tomatoes is popularly known as La Tomatina. This is a fun filled festival with joy and entertainment. People keep on throwing tomatoes on each other in this particular festival. This festival is celebrated on the last Wednesday of August month.  Thousands of people visits Bunol to participate in the wonderful food festival. This is known as the biggest food fight that involves the participation of more than 100 tons of over ripe tomatoes.

Features of famous Spain festival, La Tomatina include fireworks, music, dancing and parades. Just before a night of this famous festival, there is a competition among the participants in a cooking contest. Every year more than 40,000 people visits this festival venue and are viewed to participate in a huge tomato fight. Since, Bunol is a place with the resident of 9,000 people, visitor’s numbers to 50,000 makes the place really cramped. However, a limit was posed to the number of official participants. Only 20,000 lucky people were in a state to play this game with full rhythm.

Events and happenings of La Tomatina

The beginnings of the event take place at 11am. Tomatoes are brought through the trucks in the centre of the town named as Plaza de Pueblo. Since, bulk of tomatoes will be used in the festival; it is brought from a place where it is less expensive. The festival will only begin when a brave soul climbs up to a building with two story height and reaches the coveted ham at the top. But, actually this process takes a lot of time and no one reaches the top position. The festival starts before anyone getting up to the top. With the signal of firing with water cannons the fight with the tomatoes begins. The chaos starts roaring as soon as the water canon starts firing with water. This is the time when people throw tomatoes upon each other.

Safety during the event

Along with fun, the organizers also want people to remain safe during the festival. Thus, the participants are strictly advised to wear gloves and safety goggles. It is mandatory for the participants to squeeze the tomato before throwing the same to other participants. If a solid tomato is thrown, this might hurt people. Another important rule associated with the festival is avoiding fight provoking activity. You should not bring any harmful objects such as glass bottle, iron etc. According to the rule, no one should tear anyone’s clothing. But, the crowd does not follow this rule.

How would anyone know about whether the fight should be continues and till what time?  The participants will be provided an hour’s time to get full enjoyment in the festival. Just after an hour, again firing with water canon will take place. This is the symbol of fight’s end. No one can through any more tomatoes after the firing of water cannon. Water is provided adequately to wash away people and the town.

This crazy party travel attracts tourists every year with increasing visitor counts. Have you been to the La Tomatina festival in Spain? Let us know your travel experience by commenting below.